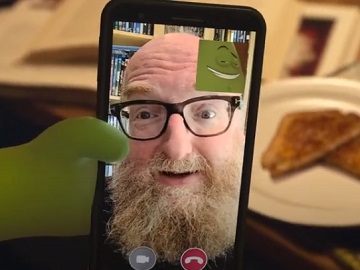 Cricket Wireless has a new deal and a new ad, titled “Fuzzy Wuzzy”. The protagonists are the company’s green mascot Barry and Brian Posehn, who are sharing impressions about their beards during a video call.

Barry also shares his satisfaction of having Cricket’s new “awesome” data plan, which allows him to check his progress. When Brian, who reveals that his long and fuzzy beard has been even longer and fuzzier, says he didn’t know Barry could grow hair, learns that it’s actually a filter.

At the end of the 15-second commercial, viewers are encouraged to get unlimited data for $60/month with 15GB of Mobile Hotspot included plus a free Nokia C2 TAVA when you switch. The phone offer ends September 17th, 2020. Requirements include bringing your number to Cricket on a $60/month voice plan, paying the first month service charge & due tax at sale, paying an activation fee in-store ($25/line), as well as additional one-time fees that may apply.