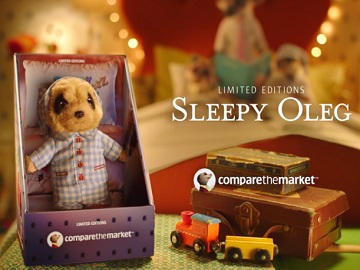 The spot features Aleksandr Orlov and Sergei struggling to put Oleg and his sister to bed, which it seems to be quite a challenge. The little ones make a mess in the room until Aleksandr comes up with the idea of reading them the story of Big Beetle Bert, which it turns out is their favorite story.

“Get your little pups to sleep with the limited editions Sleepy Oleg toy,” Aleksandr says in voiceover at the end of the video, which showcases one of the toys, clad in blue pajamas. The deal, which ends on December 14, 2020, is valid only with a qualifying purchase through Compare the Market.

A previous commercial featured Oleg, the meerkat child, learning the cleaning, swinging, and vacuuming at home school during the lockdown, while Aleksandr, his uncle, is helping Australians save money on their energy bills.

Oleg and his little sister have been featured in an older commercial, which followed them on a journey across the world to find their uncle Sergei and Aleksandr, who were in San Francisco.

Sergei and Aleksandr have been featured in numerous ads over time to promote the comparison website’s Meerkat Meals reward program, as well as Meerkat Movies.

The Meerkat Meals reward program allows customers who compare and switch providers and/or buy a qualifying product to enjoy 2 for 1 meals (starters, mains, and desserts) every Sunday – Thursday, for a whole year. The Meerkat Meals membership can be used at thousands of participating restaurants across the UK, including both well-known chains and local independents. The Meerkat Movies program offers 2-for-1 cinema tickets, but only one day/week.