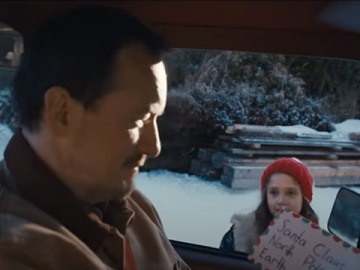 “This Christmas, give something only you can give” this is the message conveyed by Coca-Cola in its Christmas commercial.

The 3-minute film, created by Wieden+Kennedy London and titled “The Letter”, features a father who receives from his daughter a letter for Santa, to post it on his way to work. After he realizes he forgot to post the letter, he embarks on a journey across the globe to deliver personally the letter to Santa at the North Pole. When he finally arrives at Father Christmas’ house, he finds the door closed and puts the letter in front of it. At that point, the Coca-Cola truck appears and takes him back home. It turns out his daughter’s request for Santa was to bring her dad home for Christmas.

“Our new advert reflects the real magic of Christmas – our greater appreciation for loved ones, a sense of community and our need to be present with each other this Christmas, above all else,” Coca-Cola Great Britain marketing director Kris Robbens said in a press statement.

The brand, whose annual truck tour has been cancelled because of Covid-19, celebrates 100 years of Christmas ads this holiday season. This ad, which is set to run alongside Coca-Cola’s “Holidays Are Coming” ad, will air from December in the UK and in other 91 of the brand’s markets.