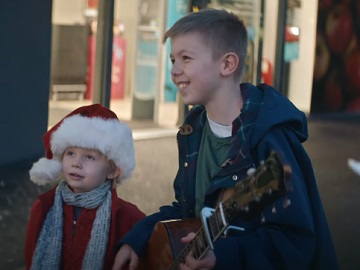 Co-op has released its Christmas advert, reminding us that “We can all do our bit for our community”.

The film features two real-life brothers from Huddersfield, 12-year-old Austin and 6-year-old Rocco, as they leave their home, where TV news announce that “Christmas will be different this year for thousands of us,” and go in front of their local Co-op store and perform Oasis’ single “Round Are Way”. Austin is also playing the guitar and manages to get a lot of attention from passers-by, who stop for a moment to enjoy the “show”. At the end, one man offers to make a donation, but the older brother politely declines.

The spot, which aims to highlight that we can all do our bit to help our local community, is the second one released by the retailer as part of its Winter 2020 campaign.

Co-op pledged of doubling the amount of money it gives back to the community as part of a refreshed Co-op Membership programme. This programme was promoted through the first advert, which was based on a poem written in conjunction with up-and-coming spoken word artist Sarah Adedeji and aired in mid-November. Co-op members get 2p back to their own wallet for every pound they spend on Co-op own brand products and indirectly make a donation as 2p goes to community initiatives and local causes. The Membership programme also features weekly personalised offers and member only in-store deals.

Oasis’ released the official video for Wonderwall’s B-side “Round Are Way” earlier this year, in October, to mark the 25th anniversary of the Britpop legends’ seminal 1995 LP “(What’s the Story) Morning Glory?”.