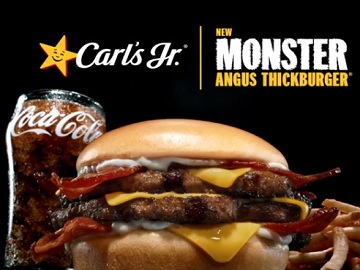 Angus beef just got an upgrade. It’s the new Monster Angus Thickburger, at Carl’s Jr. The fast-food restaurant chain has released a new ad to announce the addition of the new menu item.

The spot informs that the burger features two ⅓ pound angus beef patties and that “the only way to stop it is to eat it.” It also has four strips of bacon, three slices of American cheese, and mayo on a toasted premium bun.

The new Monster Angus Thickburger, which is very similar to Monster Double found on the Hardee’s menu and to the Ultimate Cheeseburger on the Jack in the Box’s menu, will be available at Carl’s Jr. for a limited time only.