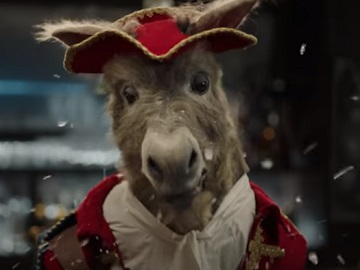 Captain Morgan promotes its Morgan Mule in a new commercial.

The spot features the Morgan Mule using his hooves to play the drums on a piece of ice taken from a bucket and finish off The Morgan Mule cocktail he’s been doing, with Captain Morgan Original Spiced Rum, Ginger Ale, lime wheel and mint.

“It’s delicious and not weird at all” an onscreen line reads at the end of the ad.

The brand of rum produced by alcohol conglomerate Diageo offers, on its website, other cocktail recipes featuring its drinks, including Pineapple Mule Cocktail, Pina Colada, Spiced Runner, and more.

This is not the first Captain Morgan commercial featuring the mule preparing a Morgan Mule. The Morgan Mule, who is actually 1 part horse, 1 part donkey and 2 parts Captain, according to the brand, was first introduced in 2017.

Captain Morgan said it offered $1million to charity if the Morgan Mule was allowed to compete against three-year-old thoroughbred horses at a horse race in Kentucky.