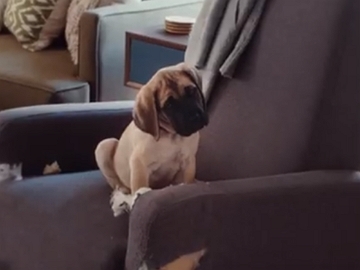 Capital One has released a new commercial to advertise its Capital One Walmart Rewards Card, which lets cardholders earn unlimited 5% back at Walmart.com, 2% back at restaurants, on travel and purchases in Walmart stores plus 1% back everywhere else Mastercard is accepted.

The 30-second ad, titled “Puppy Problems,” opens with a couple returning home and finding their puppy mouthing the armchair, in the living room. “Well, you said you wanted a new chair,” the husband tells his wife, who then goes to
Walmart.com and buys a new chair. Thanks to the Capital One Walmart Rewards Card, she gets 5% of the chair’s cost back. As the puppy continues to cause some damages into the house, the woman needs to buy other items, as well, including a mop and bleach, items for which she also gets 5% back.

“Capital One Walmart Rewards Card – Earn unlimited 5% back at Walmart online and unlimited rewards everywhere else,” the voiceover says at the end of the commercial.

The bank has enlisted a host of celebrities to pitch its cards. Jennifer Garner, for instance, who became Capital One’s spokesperson in 2014, appeared in multiple spots, set in different places, from an airplane to a mall, to talk about the Venture Card and its benefits. In 2016, she starred in a commercial with her father William “Bill” Garner, in honor of “Bring Your Father to Work Day”. Samuel L. Jackson, Alec Baldwin, Charles Barkley, and Spike Lee are also on the bank’s roster of celebrities endorsing its products. Last year, Capital One enlisted Taylor Swift to promote the company’s Savor Card, which enables cardholders to earn 4% cash back on dining and entertainment, 2% at grocery stores and 1% on all other purchases.