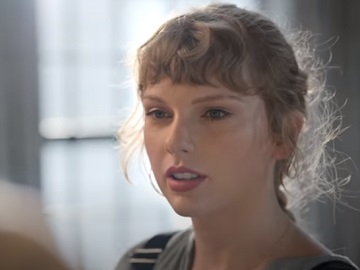 The spot opens with the bank’s spokesman talking to the camera and declaring: “With no fees and minimums on checking and savings accounts, banking with Capital One is, like, the easiest decision in the history of decisions.

Kind of like…” At this point, the pop star is shown watching outside through the window and saying in voiceover “It’s looking kinda chilly out today, what am I gonna wear?” “I think I’ll go with…a cardigan,” she decides and opens her wardrobe, revealing that it contains dozens of cream-colored knits, complete with trios silver stars sewn onto the elbows (which are her “Cardigan” merch sweaters). She grabs one and is ready to go out.

“Yep, even easier than that,” the spokesman adds, returning to provide additional information. He also mentions the bank’s top-rated app, which “lets you deposit checks and transfer money anytime, anywhere,” asking if “is it really a decision”. “That’s Banking Reimagined,” he also says, adding the tagline “What’s in your wallet?”.

Swift’s partnership with Capital One debuted in 2019. In one of the commercials, she starred as a waitress in a diner and her single “Me!” (from her 2019 “Lover” album), played on jukebox, served as soundtrack.