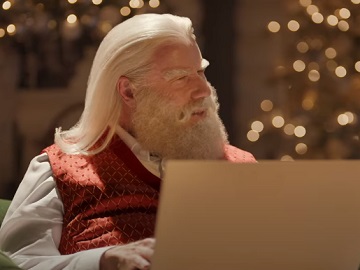 Capital One promotes its Capital One Shopping free browser extension, which automatically applies coupon codes at checkout and lets you know when prices drop on products you’ve viewed and purchased, in a hilarious new commercial.

The spot features John Travolta as Santa, who’s searching online for a coupon code to discount the price of the Christmas gifts he had bought for his elves. At his point, Samuel L. Jackson shows up on Santa’s screen, telling him that Capital One Shopping instantly searches for available coupon codes and automatically applies them. He also urges Santa to download it to his computer because it’s free. While Father Christmas is surprised to find out about this, it turns out his wife already knew about it as she says that she already has it on her laptop and saved a bundle.

The commercial ends with the Jackson adding “Capital One Shopping, it’s kind of genius” and with the Capital One’s tagline, “What’s in your wallet?”, flashing across the screen.

Capital One Shopping will apply working codes at checkout on thousands of retailers, the bank says.

Travolta and Jackson, who played partners in crime Vincent Vega and Jules Winnfield in Quentin Tarantino’s cult classic “Pulp Fiction,” have also shared the screen in the 2003 thriller “Basic”.