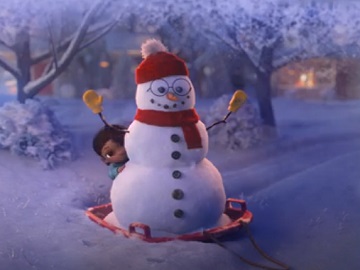 Campbell’s Soup has released an updated version of its popular “Snowman” ad, which first debuted in 1993 and has run on and off for about 25 years.

Thus, while the iconic ad featured a snowman coming in from the cold who warmed up with a bowl of Campbell’s chicken noodle soup, the new one, titled “Snowbuddy,” features a young girl carrying a snowman outside of her friend’s house and putting on his “eyes” her own glasses. The boy, who’s forced to stay inside because one of his legs is in cast, invites her in and they both enjoy a Campbell’s chicken noodle soup.

“Warm up inside and out” an onscreen line reads at the end of the commercial, which also sees the two children bursting into laughter when her glasses steam up.

The Camden, New Jersey-based company has also launched an online pledge to “Save the Snow Day” (on the website savethesnowday.com) and calls “on all who believe in shutting screens off and putting snow boots on to pledge their support to keep a cherished winter tradition alive.” The first 3,000 who pledge on the website get a free, limited-edition snow day activity kit. This kit includes a snowman making kit featuring a large wooden carrot, coal and oversized buttons, a signature red-and-white hat and scarf, goldenrod mittens, limited-edition Campbell’s Chicken Noodle Soup stackable snowman cans, and Save the Snow Day window cling.

The cans of Campbell’s Condensed Chicken Noodle Soup wrapped in limited Snowman labels will also be available for purchase, nationally.