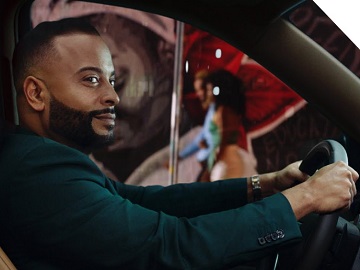 “Never stop showing up. Never stop creating like it’s your last shot. To prove yourself, all over again. Always give in style, grace, beauty. Keep making new waves for the people to dance, like the Cadillac Escalade. We are luxury, we are the ultimate vibe,” Terrero says in the 60-second spot, which shows him at the wheel of the SUV, enjoying the comfort its seats ensure, the music listening experience thanks to the available AKG Studio Reference 36-speaker sound system and the drive thanks to the Super Cruise hands-free driver assistance feature.

Other commercials in the luxury automaker’s “Never Stop Arriving” campaign feature Oscar and Emmy Award-winning actress Regina King, who was appointed brand ambassador for the 2021 Escalade earlier this year, and James Blake, who treated fans to an exclusive first listen of his new EP, “Before,” through the 2021 Cadillac Escalade;s available AKG Studio Reference 36-speaker sound system.

The brand released a short video from the musician’s show, which took place in a hangar, on a circular stage, surrounded by spotlights, and the song that served as soundtrack was his latest single, “Do You Ever”.

The commercial starring Regina King, in which she declares that “success isn’t just about where you want to get to. It’s also about how you get there,” features the song “No7body Speak” by DJ Shadow feat. Run The Jewels.