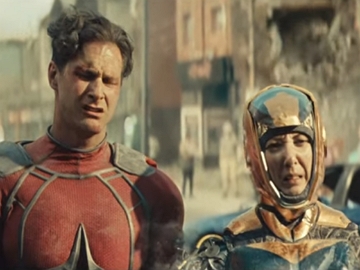 “It feels like the world is being torn apart. But it’s never too late to start making things better.” This is the idea behind the latest Coca-Cola commercial.

The 90-second spot features a diverse cast, including a couple in a car, two friends, a police officer and a car service owner, and even two superheroes, fighting in an urban cityscape that becomes more and more hectic and hostile with every fight taking place. At some point, Netflix’s Russian Doll star Natasha Lyonne shows up, holding a short, but thought-provoking speech. “Yo, hey, guys, this isn’t how you save the world. And the thing is everyone’s obsessed with being right about everything. You know, if you asked yourself ‘Could I be the one who’s wrong?’ maybe things would change for the better,” she says, asking then rhetorically “Hey, what do I know?”
The commercial, set to the tune of Slim Whitman’s 1959 single “A Fool Such as I,” ends with the onscreen lines “Everything’s better when we’re open” and shows a rat and a robot who were previously fighting drinking together Cola.

The brand’s new campaign, which will run across 10 markets in Western Europe, aims to position the drink as one that unites people in what it sees as an “increasingly divided and hostile world,” according to the vice-president of marketing for EMEA, Walter Susini.