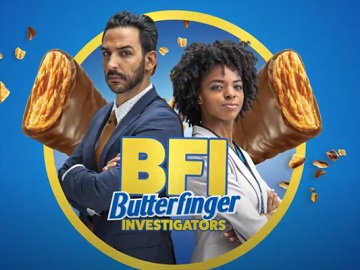 The video features the two actors as wise-cracking agents Hugh Dunnit and Ali Byes who appear at major “crime scenes” to solve cases. One of the cases involves a young woman who suspects her boyfriend of stealing all her Butterfinger bars. The duo set up a trap for the suspect but they all have a surprise to learn the true identity of the thief.

Silvia Borla, VP of Marketing for Ferrero Chocolate Brands, said in a press statement “We’re thrilled to introduce the world to the BFI.” “We’ve all given in to the temptation to steal a Butterfinger or two. With these new characters solving hilarious but relatable ‘crimes,’ we’re sure to entertain our fans and show why Butterfinger is so unique and irresistible to everyone”.

The brand also has a Halloween-themed promotion and says that, given the fact that families across the country have found that their Butterfinger bars “go missing” in the weeks leading up to Halloween, the BFI is on a mission to bring the sticky-fingered chocolate lovers to justice once and for all. “Guilty parties and Butterfinger fans can aid the BFI in their quest by turning themselves in at ButterfingerCaseFiles.com for the chance to win $25,000,” Butterfinger informed.