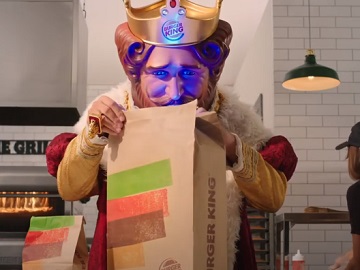 Burger King has a surprise for consumers and teases it in a 15-second ad, titled “Look What The King’s Got”.

The spot features the King in one of the fast-food chain’s kitchens looking into a large Burger King bag. At this point, a blue light comes out, shining his face, and a distinct tone plays. After watching inside twice, he grabs the bag, leaving a smaller one behind, and leaves as if he doesn’t want anyone else to see its content.

Eventually, the text “10/15” appear on the screen, viewers being informed thus that on October 15 the news will be spread.

Burger King also gives a hint, mentioning that it’s not a WHOPPER. The tone used in the spot is the same tone from Sony’s brief PS5 UI and startup tease back during the PS5 reveal in June. Therefore, judging by the sound it made and the blue light, it might be a PS4 and, most probably, the fast-food chain has a PS5 Sweepstakes in store for consumers. Taco Bell now gives its customers the chance to win an Xbox Series X by simply purchasing a medium or large drink.