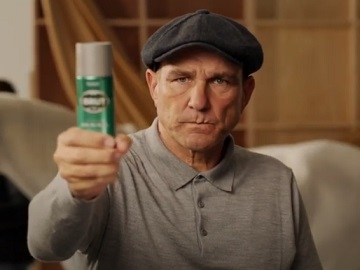 Men’s deodorant brand Brut has enlisted Vinnie Jones to star in its latest ad, which takes a jab at the clichés used in aftershave ads.

The spot features the former British football star turned actor on the set where a commercial for a luxurious men’s fragrance is being filmed. He interrupts the shoot and calls it pretentious, and urges viewers to “forget all this nonsense and use your nose”.

“Aftershaves, deodorants, roll-ons, it’s all about smelling good. Not success or being someone you ain’t. Or whatever that it. You should grab yourself some Brut. It just smells good. No messing about,” he says, showing a Brut deodorant at the camera.

“A fragrance for every man, whatever their age, Brut and Vinnie are here to shake up the world of modern fragrance with the latest ‘No Messing About’ campaign, reminding everyone to forget the nonsense and reach for a product that simply smells good,” Chris Barron, VP Beauty & Personal Care UKI at Unilever, said in a press statement.