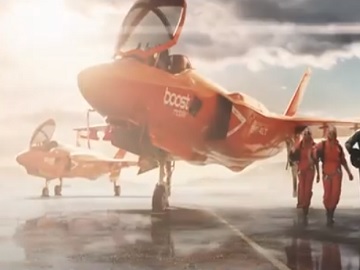 Boost Mobile has teamed up again with Pitbull to promote its new upgraded network.

The GRAMMY winner stars in a brand new commercial for the carrier, highlighting that its network isnt’ just fast, it’s “EEEEEEEYOOOOOO fast”. Mr. Worldwide is featured as the pilot of a plane, shouting “EEEEEEEYOOOOOO fast” and strutting on the landing strip, surrounded by a crew of five young women.

At the end of the video, Pitbull is shown in a meeting room, being asked by one man, probably from Boost or the agency hired to shot the ad, how you spell “EEEEEEEYOOOOOO”.

Boost Mobile also urges you to get its all-new $HRINK-IT! Plan and watch your bill shrink to $35/month after just 6 on-time payments, and highlights that you can also get a free Samsung Galaxy A11 phone when you switch. This offer requires at least one port-in and implies a limit of 1 free phone per line. Viewers are advised to visit the company’s website for details.

Boost Mobile teamed up with Pitbull in September 2019 and the singer appeared in several ads created for the multiplatform marketing campaign, which has been secured through 305 Worldwide, the agency where Pitbull (Armando Christian Perez by his real name) serves as Chief Creative.