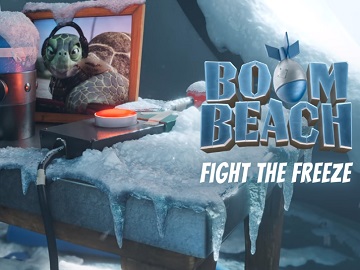 A video for the combat strategy game Boom Beach: Fight the Freeze! has been recently released, giving viewers a glimpse at the evil Blackguard and his Infernal Slushie Maker.

The spot features Dr. T, an evil Blackguard, as he talks to the picture of a turtle doing various voices and threatening to turn on his Infernal Slushie Maker, which he eventually does.

In Boom Beach: Fight the Freeze!, players must fight the evil Blackguard with brains and brawn, attack enemy bases to free enslaved islanders, explore a huge tropical archipelago and unlock its secrets, raid hundreds of enemy bases for loot, battle for control of precious resources to upgrade their base against enemy attacks, face fearsome Blackguard Bosses and uncover their evil plans. They also have the possibility to join other players to form an unstoppable Task Force to take on co-op missions.