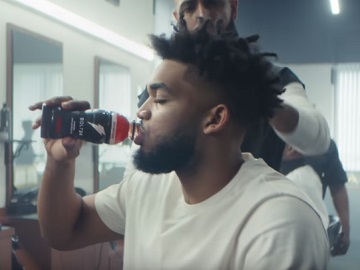 The four athletes feature in a commercial that shows them off-the-court, but still on the grind, doing other things than the ones we got used to seeing them do. The tennis champion, clad in a white shirt and dark trousers, is shown working on some fashion designs and sipping from a bottle of Bolt 24, Karl-Anthony Towns is shown at the barber shop, Zion Williamson is shown ending a “freezing” session, and Town rehabbing his knee.

The brand informs that the beverage ensures “advanced hydration,” contains electrolytes from watermelon and sea salt and no artificial sweeteners or flavors.

Serving as soundtrack the 2016 single “Come Down” by American singer Anderson .Paak, from his second studio album, “Malibu”.

Gatorade’s senior vice-president and general manager, Brett O’Brien, explained, in a press statement, that the goal of this campaign was to highlight the role Bolt plays in helping 24/7 athletes to get ready and back into the game.