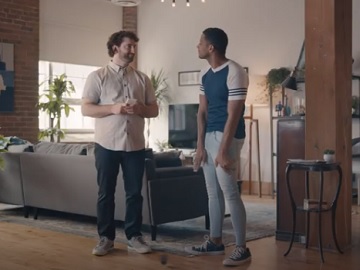 The 30-second ad features a guy wearing skinny jeans (played by Andrew Bushell) trying to put his wallet in a pocket, but having some serious trouble doing that. Luckily, Morris, who serves as BMO’s spokesman, shows up and tells him that he doesn’t actually need a wallet because with BMO he can pay just using his phone. “You’re stuck, aren’t you?” Morris asks the guy, adding that those jeans are way too tight.

Morris, who was introduced as BMO’s spokesman in March 2019, has starred in several other ads for the bank as a BMO employee who shows up with his Help Desk in a variety of settings to provide a diverse cast of characters with helpful advice.

“As we looked for a character to personify the brand, we needed someone who was approachable and witty, but also trustworthy. For us, Lamorne was the perfect choice,” said Nancy Crimi-Lamanna, CCO, FCB, in a press statement about their choice. The campaign fronted by Lamorne also promotes the BMO Harris Smart Advantage Account and the Cashback Mastercard.