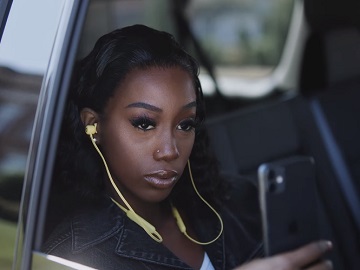 Beats by Dre has launched a new ad campaign, called “Flex That,” which aims to promote racial equality by featuring “influential Black, Gen Z talent, who continue to take a stand against racial inequality while inspiring youth around the world to bravely challenge norms, push boundaries and celebrate their identities”.

One of the videos stars 20-year-old female rapper Flo Milli (Tamia Monique Carter by her real name) as she gets out of an SUV and starts dancing in front of a confederate leader’s statue. “Flex That Clapback” an onscreen line reads at the end of the 30-second spot.

Serving as soundtrack is her 2020 single May I from her debut mixtape, “Ho, Why Is You Here?”.

Flo Milli, wo gained fame after her 2019 singles “Beef FloMix” and “In The Party” went viral on TikTok, was nominated for Best New Artist at the 2020 BET Hip Hop Awards.

The Beats Flex headphones, featuring the W1 chip, 12 hours of battery life and a USB-C port for charging, are now available for purchase on Amazon. At the moment, customers can choose from two colors: Beats Black and Yuzu Yellow. Early next year, other two colors, namely Flame Bly and Smoke Gray, will be made available.