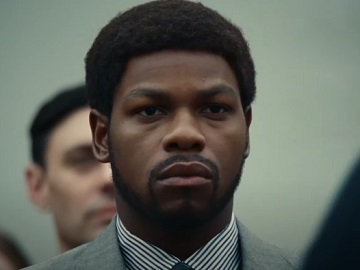 BBC has released the trailer for the third film in the BBC’s “Small Axe” series, titled “Red, White and Blue” and based on the true story of a young forensic scientist who joined the police in 1983 after seeing his father assaulted by police officers.

The trailer features John Boyega as Leroy Logan, the young man who is driven to join the force, with hopes of changing racist attitudes from within. However, he soon finds himself facing both his father’s disapproval and racism in the ranks.

In the opening of the trailer, Leroy and his family are shown sitting around the table, with his mother asking God to keep Logan safe during his police training and to grant them “the wisdom to accept his decision”.

The song used in the trailer is Bach’s “Fantasia And Fugue In G Minor, BWV 542.

Red, White and Blue airs on BBC One and iPlayer this Sunday, November 29.

Steve McQueen told the BBC that “The seed of Small Axe was sown 11 years ago” and that, initially, he had conceived of it as a TV series. “But I realised these stories had to stand alone as original films, yet at the same time be part of a collective. The anthology, anchored in the West Indian experience in London, is a celebration of all that that community has succeeded in achieving against the odds,” he also said.