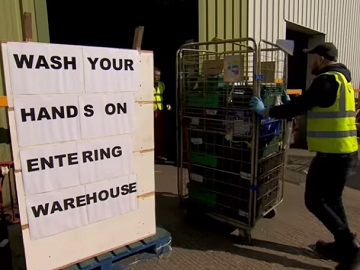 BBC has released an emotional video message that aims to highlight that the BBC is helping us create shared experiences and emotions that will bring us closer as a society when we need it most.

The 90-second spot, developed by BBC Creative, features a montage of real-life footage of events that took place in the past few weeks, moving from deserted streets and empty supermarket shelves to viral moments like the “Clap for our NHS carers,” personal videos from NHS staff, the construction of the NHS Nightingale hospitals, interviews, as well as heart-warming scenes.

Serving as soundtrack is the inspirational poem “Don’t Quit” by Edgar Guest, read by the award-winning actor Idris Elba.

“When things go wrong, as they sometimes will,
When the road you’re trudging seems all uphill,
When the funds are low and the debts are high,
And you want to smile, but you have to sigh,
When care is pressing you down a bit,
Rest, if you must, but don’t you quit.

Life is queer with its twists and turns,
As every one of us sometimes learns,
And many a failure turns about,
When he might have won had he stuck it out;
Don’t give up though the pace seems slow–
You may succeed with another blow.

Success is failure turned inside out
The silver tint of the clouds of doubt,
And you never can tell how close you are,
It may be near when it seems so far,
So stick to the fight when you’re hardest hit
It’s when things seem worst that you must not quit.”