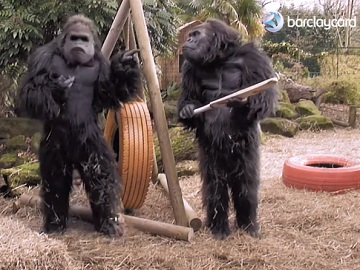 Barclaycard promotes its Fraud Fighter Tool in a new advert, part of a campaign that aims to give a different perspective on spotting fraud.

The spot, created by agency Oliver and directed by Marcus Liversedge, features some “not so hard to spot” frauds at the local zoo. A bunch of gorillas (that are actually actors in very real gorilla suits) are shown doing all kinds of things, fooling the unsuspecting public. However, people’s reaction soon changes as they realize those gorillas are frauds in a very easy to spot way – since they are playing cricket, dancing, and sharing a latte.

“If only all fraud was this easy to spot… you’ll protect yourself from fraudsters,” the voiceover says, urging viewers to search Barclays Fraud Fighter Tool.

According to Barlcaycard, online fraud costs people in the UK 10bn each year through scams such as phishing and page-jacking. The bank has promoted its Fraud Fighter Tools in the past with the same “Monkey Business” ad, which became, in 2018, Barclaycard’s most successful piece of social content ever, with over 3.5 million YouTube views, and even more on Facebook, all within 2 weeks.