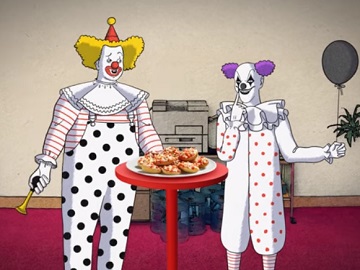 Bagel Bites promotes its pizza on a bagel in a series of new ads, highlighting that, despite our differences, we can all agree with that.

One of the spots features two clown having a bite sized debate on the reaction children have when they see clowns. “Don’t your just love the look on the kids faces?” asks one of them, who is a silly and funny clown. His fellow, who’s a scary clown, answers that he loves indeed that look of pure terror. He says he also loves that second right before the first tear comes.

“Pizza on a bagel, we can all agree with that,” the voiceover says at the end of the commercial.

Other commercials include two dogs wearing pants, a horse and a pony, an egg and a hen – all having a bite sized debate over a plate filled with pizza on bagels.