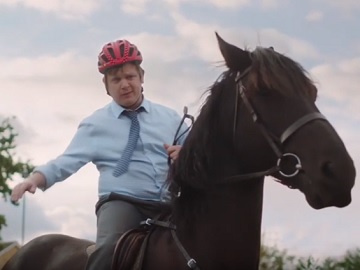 Aunt Bessie’s invites you to “Bring Out the Bessie in You” in its latest ad, part of the brand’s biggest-ever campaign, entitled “Glory Awaits”.

The spot features a man using unlikely modes of transport to get home, for dinnertime, to serve his children Aunt Bessie’s Yorkshire puddings, crispy roast potatoes and honey glazed parsnips. He runs among people, rides a bike and even a horse to get to his kids, where dinnertime glory awaits.

The soundtrack music is “Grandstand” by Keith Mansfield.

The advert debuted in October 2019 on TV and aired during some of ITV’s most-watched shows including Coronation Street, The X Factor and Emmerdale.

The brand’s marketing director, Hannah Haas, said in a press statement that “Bring Out the Bessie in You” was a “step-change” for Aunt Bessie’s. “The concept had originally been tested with Margaret and Mabel, the nosey neighbour characters introduced in 2009, but the brand ‘instinctively felt it was time for a modern injection’, Haas added.