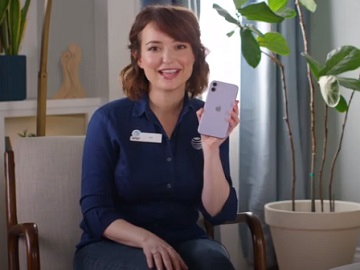 AT&T has brought back saleswoman Lily Adams to promote the company’s deal on the iPhone 11, which is now half off.

“Hey, Lily from AT&T. I’m back,” the 33-year old actress Milana Vayntrub says, mentioning that she’s working from home and is here to help. “Here’s a tip. Get half off the amazing iPhone 11, on AT&T, America’s fastest network for iPhones.” She then gives a second tip: “You can put googly eyes on your stuff to keep yourself company.” At this point, she shows a picture of a guitar with goggly eyes, which she introduces as Geraldo, her best friend. The next second, she realizes her coffee cup, Nancy, was there. “Oh, sorry, Nancy, I forgot you were there,” she apologizes, believing she had hurt Nancy’s feelings.

The commercial ends with the voiceover urging viewers to get the amazing iPhone 11 for half-off on AT&t, America’s fastest network for iPhones. The offer is valid when you buy on a qualifying installment plan with an eligible AT&T unlimited plan (min. $75/month before discount).

The Uzbekistan-born American actress and comedian starred in AT&T ads as saleswoman Lily Adams from 2013 to 2016. She has also had small roles in film and television, including Life Happens, This Is Us, Other Space, and more.