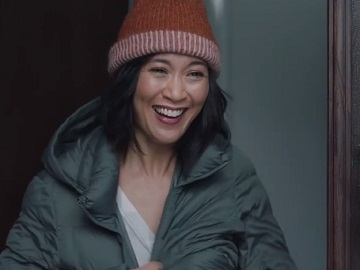 AT&T continues its “Just OK Is Not OK” campaign with a new installment. This time, the spot highlights that “Just OK gifts are not OK” by featuring a woman who finds on the pillow next to her, on Christmas morning, a set of keys and is led to believe that she received a car. As her husband lifts the garage door, it turns out the Christmas present is actually a snow blower, which makes the smile on the woman’s face disappear.

The “Just OK Is Not OK” campaign includes several other spots created on the same idea and encouraging viewers to get America’s next wireless network. One of them features a mechanic (played by comedian Tom Segura) who makes a joke about the brakes when he’s approached by a customer, another spot features a couple who are about to leave their kids with a babysitter that’s “ok with kids” in theory, but doesn’t remember anything about them, a patient who realizes that his surgeon is just ok, a guy about to get a tattoo who realizes that the tattoo artist he came to is not one of the best in the city, as he thought, but only one of the tattoo artists in the city, two couples in a restaurant who learn that the salmon they intended to order was actually not ok, a mother and her son getting ready for an amusement ride and learning that the safety system was improvised by a guy who thinks he did an OK job, and more.