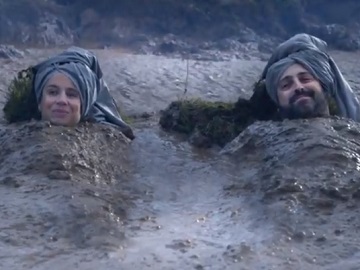 Asda advertises its delicious plant-based ranges in a new spot, that features the “adventures” of a couple who compromised and encourages viewers to not compromise.

The 30-second ad, titled “Deep Trouble,” features Katie and Simon, who wanted to do different things over a weekend away and ended up on the local news. Why? While she wanted adventure, he wanted to relax at a spa. So they eventually went on to relax in a deep mud “lake,” in the middle of nature.

This didn’t turn out to be a good idea since it was necessary for a rescue team to show up and help them get out of there.

“Don’t compromise,” the voiceover urges people at the end of the advert, which sees the rescued couple being seated at a table that is filled with plant-based dishes, from tacos to pizza, to tortillas, cheeseburgers, and more.