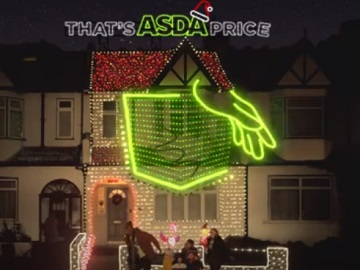 Asda, one of UK’s most popular supermarket chains, has brought its superfan real-life family Sunny back for the Christmas 2020 advert.

The spot features the curly haired man (who it turned out is an actor and DJ named Muzz Khan, from Burnley, Lancashire), his wife, Amy, and their children getting ready for the holidays, while he delivers the following message in voiceover: “I guess Christmas it’s going to be different this year. So let’s really make the most of it. The parties might be smaller, but we can still have great food and we can still party. We can still make new friends. And keep the old traditions. Asda’s got it covered.” In one of the shots, which features him holding a sprout-shaped cake, Sunny raises the question “To eat or not to eat?”, and another shot features him preparing sprouts.

At the end of the spot, he and his family are shown going all out of the house to watch their Christmas lights – a giant illuminated Pocket Tap – turning up in the dark. “It’s the Christmas we all need, at the prices we all want,” Khan says, adding the tagline “That’s as Asda Price Christmas”.

The soundtrack is Stevie Wonder’s single “What Christmas Means To Me”.

Muzz Khan also stars, along with the members of his family, in several other ads for the British retailer, created by Asda and AMV BBDO. The new campaign, titled “That’s Asda Price,” features an updated Asda Price jingle and pocket tap. The famous Asda pocket tap was first featured in 1977 and last appeared on screens in 2006.

The full Christmas range will be available at Asda starting December 10.