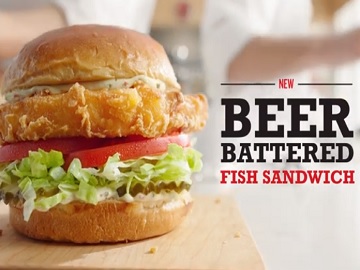 “Fish sandwiches have always had the same batter, cheese, sauce, and hamburger bun,” the voiceover says in the opening of the 30-second ad, asking then “Where’s the ambition?” “If it were up to Arby’s, and it is, there’d be a fluffy brioche bun, real beer in the batter, flaky cod, pickles,” the voiceover also says, while viewers are given a glimpse at the fresh ingredients of the chain’s new menu item. “What was everybody so afraid of? Arby’s ain’t afraid of no fish,” the voiceover adds.

The sandwich, which also features shredded lettuce, tomatoes and tartar sauce, will be available for a limited time at participating locations, while supplies last.

Usually, Arby’s offers seasonal fish sandwiches from around January through April. This marks the second time that Arby’s is offering a fish sandwich this year. Earlier this year, they offered the Crispy Fish, Hawaiian Fish Deluxe, and new Fish ‘N Cheddar.