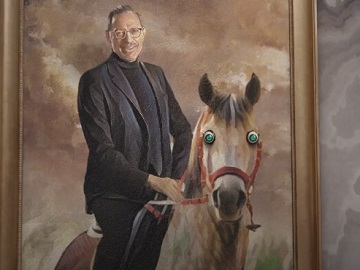 Jeff Goldblum reprised his role as Bradd Bellflower, the inventor of the Apartminternet, in a new commercial for Apartments.com, titled “Masterpieces”.

The actor, who was tapped in 2015 by the rental website to portray the eccentric Silicon Valley maverick and visionary futurist, reveals another way Apartments.com manages to put more people in new homes than anyone else. It turns out they are using “a generous arts endowment program” which consists of works of art featuring Bellflower and various animals, such as a horse and an ostrich, whose eyes include surveillance cameras that help the team behind the screens find out when listings are becoming available.

The commercial ends with Goldblum saying the tagline “Apartments.com – the best place to find a place”.

In another commercial, Goldblum shows people how the website manages to have more listings than other websites. The strategy includes dogs left roaming in parks and cones equipped with wireless audio surveillance systems.

Another recent ad, which aims to highlights that Apartments.com makes getting into a new home easier than ever, features a man whose tears help him find a new apartment on the rental website.

At the end of 2019, Goldblum appeared in a series of ads called “Renters Holiday Questions Answered” to answer renters most puzzling holiday questions.