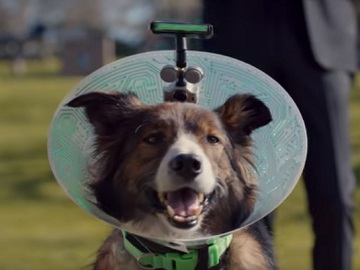 Apartments.com has dropped a hilarious new ad featuring Jeff Goldblum to show people how the website manages to have more listings than other websites.

The spot features the actor, who reprises his role as eccentric Silicon Valley maverick and visionary futurist Brad
Bellflower, standing in a park and declaring, in front of the camera, that Apartments.com puts more renters in more new homes than any other website by sniffing out more listings than anybody else. He is then shown commanding the release of dozens of dogs wearing cones, which are equipped with wireless audio surveillance systems. Bellflower and his assistant are thus able to get potential leads on vacancies, even though the former had been skeptical about it.

The commercial ends with Goldblum saying the tagline “Apartments.com – the most popular place to get a place”.

Goldblum was tapped by the rental site to portray Bradd Bellflower, the inventor of the Apartminternet, a place where rental choices and realities are infinite, in 2015. At the end of the last year, he appeared in a series of ads called “Renters Holiday Questions Answered” to answer renters most puzzling holiday questions.

Apartments.com has stiff competition, though, from the likes of Apartment Guide, Rent.com, ForRent.com and Zillow.