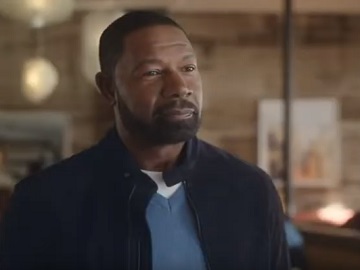 This time, the actor enters a burger joint, where everyone knows him. “It’s ‘Safe drivers save 40%,” the staff say looking at him. Moreover, some of the clients recognize him, too, and don’t hesitate to say out loud that it’s him, the guy “Safe drivers save 40%”.

“Safe drivers do save 40%,” the voiceover points out at the end of the commercial.

Dennis Haysbert, also known for his roles in the Major League film trilogy, in the 1997 political thriller Absolute Power, on the drama series The Unit, and the sci-fi series Incorporated, became an Allstate spokesman for the insurance company in 2003. Between 2003 and 2016, he appeared in more than 250 commercials. Along with the commercials starring Haysbert, Allstate is also airing ads starring Dean Winters, who portrays the company’s havoc-wreaking character, Mayhem, since 2010. One of the ads also starred Tina Fey, who became thus the first celebraty to be featured in the Mayhem campaign.

The insurance company informs that, whether you’re an Allstate customer or not, you can earn rewards for your everyday safe driving with Drivewise. In order to do that, you just have to download the Allstate mobile app and activate Drivewise to get personalized features to help keep you safe on the road, and – in addition – earn Allstate Rewards points by completing safe driving challenges. Points are redeemable for savings on your favorite brands, daily deals, gift cards, travel, merchandise, and more.