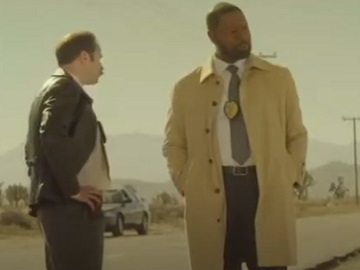 The spot, which aims to show that the actor is regularly reminded of his connection to the Allstate brand – even while filming other work, features Haysbert as a detective on the side of a desert road, talking to Sonny, a police officer who tells him that it “looks like they picked the wrong getaway driver,” referring to a couple that had just got arrested.

When Haysbert answers that “they’re going to be paying for this for a long time,” Sonny agrees, adding “But with Accident Forgiveness, Allstate won’t raise your rates just because of an accident even if it’s your fault.” At this point, the director shouts “Cut!” and reminds Sonny that he was supposed to say something else. It thus turns out Haysbert and Sonny are actually shooting a scene from a movie and his line was “The desert never lies”. Sonny then tries to justify himself by implying that he couldn’t help it, having Allstate’s spokesman in front of him.

“Accident Forgiveness from Allstate. Click or call for a quote today,” Haysbert says in voiceover at the end of the commercial.

In order to qualify for Accident Forgiveness, customers must purchase a “Your Choice Auto” policy, which has a unique set of rules and costs more than a regular policy. For details, you are advised to check the company’s website or talk to an agent.

Dennis Haysbert, also known for his roles in the Major League film trilogy, in the 1997 political thriller Absolute Power, on the drama series The Unit, and the sci-fi series Incorporated, became an Allstate spokesman for the insurance company in 2003. Between 2003 and 2016, he appeared in more than 250 commercials. Along with the commercials starring Haysbert, Allstate is also airing ads starring Dean Winters, who portrays the company’s havoc-wreaking character, Mayhem, since 2010. One of the ads also starred Tina Fey, who became thus the first celebrity to be featured in the Mayhem campaign.

Allstate, the second-largest insurance company in the country and one of the best-known names in the industry, has also promoted its other car insurance features, including Safe Driving Bonus Check and Deductible Rewards.