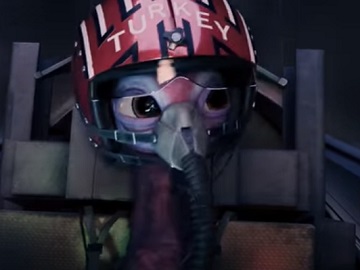 Kevin the Carrot is back to the screens for Aldi’s Christmas 2020 campaign. The British retailer has released the trailer for its holiday spot and the vegetable takes center stage together with a turkey.

The video, apparently inspired by a Top Gun scene, features Kevin cruising in a fighter jet and showing off some tricks, with his wingman, Lieutenant Turkey, in the back seat. At some point, they have an encounter with Santa’s sleigh and Turkey says he’s roasted. He decides to open the window but he accidentally ejects Kevin, who is then seen spiraling down to earth, his parachute in flames.

At the end of the spot, the hashtag #WhereIsKevin appears on screen.

The full advert is expected to be released later this month, but the exact date is not known yet.

Kevin the Carrot has featured in Aldi’s Christmas campaign for the past five years.