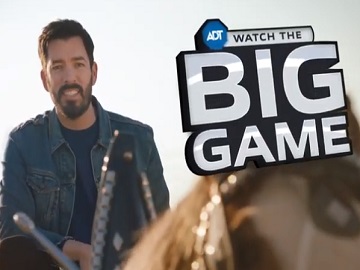 The hosts of HGTV’s Property Brothers, Drew and Jonathan Scott, are representing ADT once again.

They co-star in a 15-second teaser for the security brand, urging viewers to watch the Big Game with ADT on February 2nd. Jonathan is shown ringing the bell at the front door and Drew answering from a horse-drawn chariot.

He reminds him that the game won’t be until February 2nd, but – when he is asked where he is, he refuses to say, keeping the suspense. “Oh, you’ll see!” he replies, urging then viewers to tune in to the Big Game on February 2nd.

Drew and Jonathan Scott also starred in the security brand’s 2019 Super Bowl commercial, highlighting that the importance of home security goes having a video doorbell, smart locks and home security apps and that all of the technology should be coupled with professional surveillance from ADT.