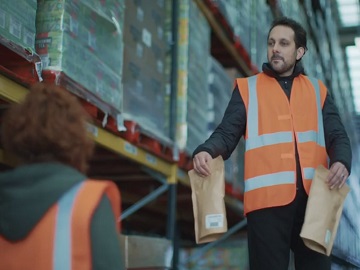 British tea brand Yorkshire Tea has enlisted Sean Bean and Dynamo to star in its latest ad campaign, that carries the tagline “Where Everything’s Done Proper”.

The world-renowned magician is featured in the Yorkshire Tea warehouse levitating through the air and passing teabags to an employee on the floor, who was shouting into the air to ask a colleague to pass down some tea.

The Game of Thrones star calls upon his character Ned Stark in an advert set at Taylor’s Harrogate headquarters, where an induction session is taking place for starters. Pointing a presentation stick like a sword, he holds a rousing speech in front of his audience.

Bean and Dynamo are following thus in the footsteps of the likes of Michael Parkinson, award-winning indie rock band Kaiser Chiefs, and Olympic triathletes the Brownlee Brothers.

The TV spots, part of a £3 million campaign created by Lucky Generals, debuted on Tuesday, July 2. They were both filmed at Yorkshire Tea’s warehouse and offices in Knaresborough with employees from across the business starring alongside Yorkshire Tea’s new recruits.