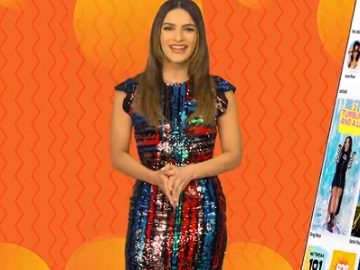 Yahoo invites people to play trivia with Sandra Vergara on Yahoo Play in a new commercial for the original show Pop Play.

The 15-second ad features Sofia Vergara’s adopted sister, who is an actress and model, encouraging viewers to prove they know pop by testing their entertainment knowledge on the interactive quiz show, on Yahoo Play, where they can play along and get rewarded.

The Yahoo Play app is available for download on the AppStore and on Google Play. With the latest in celebrity, pop culture and entertainment news, the app allows users to answer trivia while you they fresh original shows such as The Drop, a daily roundup of the hottest celebrity gossip and pop culture news, Beat the Street, featuring unsuspecting Londoners on the street as they answer music, film and off-the-wall trivia questions in unconventional ways, Camp Confessions, featuring host Shannon Coffey and celebrity guests as they share weird, fun and random stories and confessions you have never heard before, and more.

You can score points that you can subsequently redeem at Amazon, Nike, Whole Foods, and more.