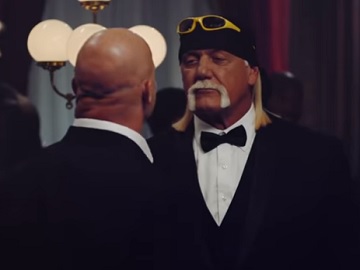 WWE 2K20, the professional wrestling video game developed by Visual Concepts and published by 2K Sports, is advertised in a star-studded commercial.

The spot, created by agency barrettSF and titled “Ballroom Brawl,” features some of the biggest personalities in WWE Wrestling all gathered for an event at a fancy mansion. Wearing tuxedos and gowns, the wrestling legends including Steve Austin and Hulk Hogan, Becky Lynch and Charlotte Flair, are facing each other with meaningful looks, while juxtaposed footage shows them in matches that never happened, allowing fans to imagine those legends going head-to-head.

Toward the end of the video, manager and commentator Paul Heyman is featured accidentally knocking a dessert on Roman Reigns, which makes him give an ice-cold stare. However, the scene quickly cuts to shots of the game in motion and the film ends.

Eventually, viewers are informed that WWE 2K20 launches October 22 and that they can now pre-order the game.