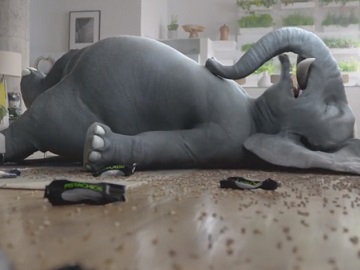 Ernie the Elephant is back to the screens in a series of new Wonderful Pistachios ads.

The other spots feature Ernie in an elevator, talking about how he appreciates that Wonderful Pistachios are a healthy snack in this age of “unrealistic body expectations,” and at the airport, where he gets strip-searched by airport security (but this is no surprise for him since importing ivory is illegal). A fourth spot features Ernie after the same party with the Squirell Sisters, sharing his regret. “Do I regret ditching peanuts for heart-healthy pistachios? Not at all. Do I regret getting a mouse tattoo last night? Yes, I do,” he says, admitting that that was a bad decision on his part.

All the ads end with the brand’s tagline, “Get crakin’,” flashing across the screen.