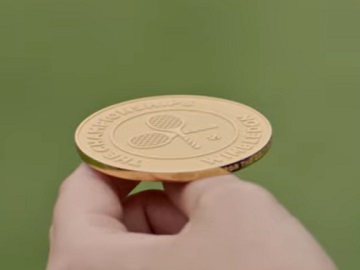 The AELTC has partnered with McCann London and Craft London to create a new 60-second film, entitled “The Coin Toss,” to celebrate the four finalists who made it to Wimbledon finals.

The spot, narrated by AELTC Chairman Philip Brook CBE, gives viewers information about the coin toss, their trip into space, and the meaning of this odysey. “There is so much change at Wimbledon from year to year, from decade to decade. It’s a constant continual improvement. Now we’re able to do things that have never been done before. Two special coins will be tossed before the ladies and gentlemen’s final. Two coins that have been into space. The trip symbolizes the incredible journey these players have been on to reach the finals. Is a quest to be great. It is an amazing story. Part of women’s long and rich history,” Brook says, while on screen footage of tennis champions, of the coins and more is shown.

The ad is set to run across TV and online globally, to promote the Finals Weekend, on Saturday 13 and Sunday 14 July.