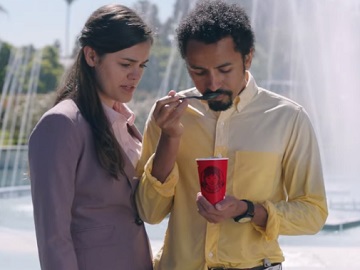 Wendy’s informs, in a hilarious new ad, that its 50¢ Small Frosty is back.

The spot opens with a young woman asking a man if in the cup he’s holding there is a Wendy’s Frosty. Learning that it is and right now its price is just $0.50, the woman jumps in the artesian well behind them and grabs some coins thrown in there by tourists.

“The 50¢ Frosty is back. So if you need your Frosty fix, we got you covered,” says the voiceover at the end of the commercial, which also sees another man throwing himself in the fountain to grab some change.

The Frosty was developed by Wendy’s founder Dave Thomas in the late 1960s. Wendy’s introduced the 50¢ Small Frosty in May 2018 and brought it back in August. Now, the offer will be available for a limited-time only, as well, covering both chocolate and vanilla versions of the classic dessert. However, the deal doesn’t apply to the chain’s new Frosty Sundae.

Wendy’s is also bringing back its spicy chicken nuggets. Following a tweet from Chance The Rapper, who said that Wendy’s was going to bring back the nuggets, the company responded by saying that if the tweet got 2 million likes, they would bring them back.