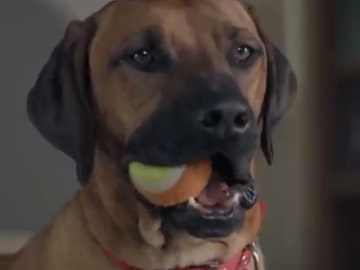 Wells Fargo advertises its “simpler online mortgage application” in a new commercial, featuring Lulu and Logo, two cute dogs who conclude, after the babies have taken over, that it’s time to find a bigger place.

The 30-second spot features Lulu and Lobo in their home, recalling moments from before the arrival of the newest family members. Chewing something found on the living room floor, Lobo tells his furry fellow he remembers when he was the only one who ate things off the floor. Coming to surface from a huge pile of stuffed toys, Lulu concludes that the babies have completely taken over and that they need a bigger place, something that Lobo agrees on.

As the spot ends, the voiceover informs that “It’s easier to apply for a new home with a simpler online mortgage application from Wells Fargo”. Lulu and Lobo are shown again, talking about other reasons they need a bigger place, such as the fact that babies need to be trained. On this occasion, Lobo finds out a shocking truth, namely that babies grow, which makes his lose his appetite, but only for a second.

Viewers are then encouraged to apply online or talk to a home mortgage consultant and, eventually, the company’s tagline, “This is your way home. This is Wells Fargo,” is added.

This is not the only commercial Lulu and Lobo appear in. A previous spot features the two four-legged friends being wakened up by an ambulance siren (which they call the “Woo-Woo Monster”) on a lazy afternoon, which makes Lulu say they need a new place to live. Wells Fargo states that a new home is within reach because it’s offering as low as three percent down on a fixed-rate mortgage.