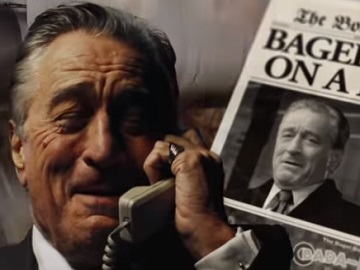 The 2-minute film, which pays homage to the two-time Oscar winner’s legacy as a famed gangster-genre actor and particularly his iconic role as Tommy DeVito in Scorsese’s 1990 film GoodFellas, features De Niro as a New York mafia boss who travels, together with his gang, to Bolton, UK, where he busts into the office of Jonathon Warburton, the head of the Warburtons brand, and tells him that they plan to pass off the new doughy bagels as their own. Helped by two accomplices, he then breaks into the Warburtons factory, after tying up a security guard with duct tape, and re-labels their products as “GoodBagels”.

The spot, released with the tagline “From our family to yours,” marks the launch of Warburtons new bagels which come in plain and a fruity cinnamon and raisin flavour.