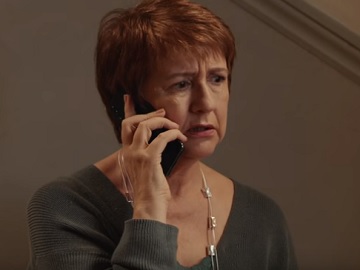 Waitrose & Partners has released a hilarious new advert to present the Pulled Beef Salad with Mint and Avocado, one of the Beautifully Simple recipes, that are “simple to shop, simple to cook”.

The 40-second spot features a wife who, returning home from work, is shocked to find out that her husband has been able to prepare slow cooked beef so quickly on a weekday. During a conversation over the phone with her mother, the woman shares her worry that her husband might have lost his job because she imagines the dinner preparation took him hours and he usually doesn’t get home before 6.30. She then begins to think about the mortgage and the fact they will lose the house.

During dinner, the wife praises the dish and nods at the huge amount of time necessary to get it ready. Learning that it only took 30 minutes, she tells her husband she know he lost his job and asks him to not worry because they can move in with her mother, which leaves the man speechless – especially after taking a look at a photo of his mother-in-law.

The advert ends with the voiceover saying the campaign tagline, “Beautifully Simple Recipes. Simple to shop. Simple to cook”.

The Beautifully Simple series also includes other recipes that are simple to shop and simple to cook. Among them are veggie balls in tomato sauce with bucatini, which is a vegan pasta recipe that needs just 5 minutes prep and 20 minutes to cook, chicken with fragrant Hainanese-style rice, which is often referred to as Singapore’s national dish, lemon pepper cod, baby potatoes and pea shoots, which is described as “a lovely dish for a summer’s evening,” steak with sweet potato wedges and slaw, and others.