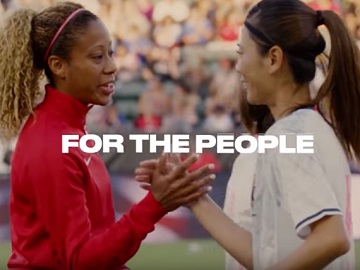 Volkswagen has released a new commercial, announcing its partnership with the non-profit governing body for soccer U.S. Soccer.

“In soccer, a goal is always a goal. Whether it’s scored in front of millions of people or a handful of parents at the local park. In soccer, effort is always admired. Hustle is always valued. And attitude goes a long way. Soccer is an equal-opportunity teacher and all it asks in return is that you love the game. But even something we love can be made better. So at Volkswagen, we’re creating One Goal in partnering with U.S. Soccer. We want to make 2019 all about inclusion and accessibility for women, whether they’re players, coaches, fans or officials. And we won’t stop there. We’ve got lots of ideas and they all come down to the same thing: raising the game. One team. By the people. For the people. Undefeatable. One Goal,” the voiceover says on the 60-second ad, which includes footage of female soccer players on the field, as well as amateur footage of kids who are playing soccer in their backyard, in their neighborhood or at the local park, of kids and youngsters juggling the soccer ball and practising their dribling skills.

The automaker will be the U.S. Soccer’s presenting automotive partner through 2022. Scott Keogh, the President and CEO of Volkswagen America, said in a press statement “We are absolutely thrilled about this partnership with U.S. Soccer.” Our program is about helping to grow this great sport in the U.S. We’re calling it One Goal – and the first step is making it easier for women to stay with the sport and pass on their wisdom and passion and love to the next generation of players”.