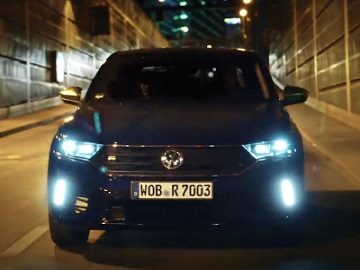 Volkswagen has enlisted Dj-icon Ellen Allien and rugby celeb James Haskell to star in a campaign for the new T-Roc R.

The two have roamed the streets of Berlin with the new T-Roc R and got inspired by the city’s sounds. The commercial they filmed, entitled “One Car, Two Worlds,” features them at the wheel of the SUV as well as at work – Haskell being shown on field and Ellen mixing. “Beautifully strong” an onscreen line reads at the end of the 30-second video.

The SUV features the automaker’s EA888 2.0-litre turbocharged petrol engine – now fitted with a particulate filter and in 296bhp tune – part-time Haldex-based all-wheel drive and a seven-speed dual-clutch gearbox. Thanks to lower suspension and firmer settings, it is 20mm closer to the ground than the standard T-Roc and has 18in wheels as standard. The new T-Roc R also features beefier bumpers, an anodised finish for the radiator grille, matt chrome mirror caps and R badges. The interior got a carbonfibre trim and a sportier steering wheel.

First revealed at the Geneva motor show in March, the new Volkswagen T-Roc made its UK debut at the Goodwood Festival of Speed and will go on sale in the autumn.