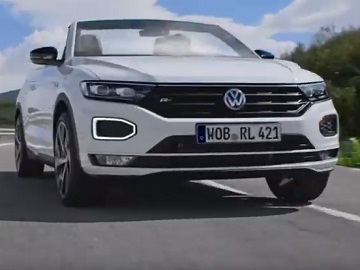 Volkswagen presented the first open crossover in the compact class – the T-Roc Cabriolet – at the Frankfurt Motor Show and showcases it in a commercial that encourages people to shut down all voices that want to tell them how to live their life and set themselves free from barriers and limitations.

Released with the #AcceptNoRoof tagline, the 90-second spot features a diverse cast declaring what different people say. Thus, viewers are reminded a series of contradictory statements from figures like doctors, show hosts, food bloggers, cross-fit trainers, life coaches, family members, friends, and society, which says, on one hand, “don’t be bossy,” but on the other hand says “don’t be too soft”. “Don’t eat meat,” “Don’t be vegan,” “Don’t sleep too little,” “Don’t wake up late,” “Don’t worry about your age,” “Don’t be immature,” “Don’t give up on your career,” “Don’t forget your mother,” are among the other statements included in the video, which ends with a young woman at the wheel of the T-Roc Cabriolet, who says what the wind says: “Shush!” She is then seen driving along a coastal road and enjoying the soft breeze in the convertible crossover.

“Accept No Roof. The all-new T-Roc Cabriolet,” the voiceover says at the end of the commercial.

The T-Roc Cabriolet is described as a convertible with SUV genes, whose electrically operated soft-top opens in nine seconds. Featuring a mix of striking design, elevated seating and high functionality, the crossover also boasts integrated eSIM with the latest-generation modular infotainment matrix (MIB3), BeatsAudio system with 400-watt output, as well as comprehensive passenger safety. The stylish and sporty member of the T-Roc family comes in both the Style and R-Line packages and is set to have its market launch in spring 2020.