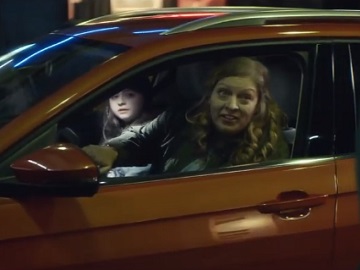 Volkswagen has launched a new ad campaign in the UK, that urges people to discover a new sense of confidence with the Volkswagen SUV Range.

One of the spots features a mother and her teenage daughter in a T-Cross driving through the night in their quest to escape a zombie invasion. At some point, they stop at a gas station to fuel the car and, despite the girl’s request to remain in the car, the woman gets out and encounters a zombie. However, she doesn’t get terrified, but – with the confidence of a movie star – she tells him she didn’t realise that place was full-service and lets him help her out as if he was a gas station employee. She hands him $20 and gets into the car, says he seems nice.

Seeing that he doesn’t proceed to fuel the car, she politely tells him they are in a bit of a rush, trying to get to the border and get away from all the zombies out there.

The end of the advert sees several other zombies walking toward the T-Cross and the line “Inspires movie star confidence” flashing across the screen.

The campaign also includes other spots, that showcase the other members of the automaker’s family of SUVs, including the T-Roc, the Touareg, the Tiguan and its extra-large big brother the Tiguan Allspace. “Each one inspires, empowers and reassures in the way that only a Volkswagen SUV can,” the brand states, mentioning that each model has been “beautifully designed, fitted with next-generation technology and engineered to Volkswagen’s exacting quality standards to ensure complete reliability”.