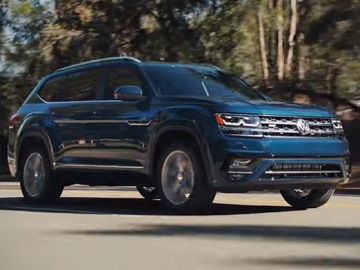 Volkswagen advertises its Atlas SUV in a new commercial, encouraging viewers to plan their next getaway in the Volkswagen Atlas with 3rd row seating.

The 30-second spot, titled “Hooky,” features two siblings at the same school – a boy and a girl – as they are allowed to leave school because their uncle Andrew passed away. As the ad goes on, though, it turns out this is an excuse used six time throughout the year, so far, by the kids’ parents to take them from school and enjoy a fun day together. This time, they all go in an amusement park.

“Poor uncle Edward. He’s passed away six times this year. And… we don’t even have an uncle Edward. And yet, somehow, I think this is what he would have wanted. The Volkswagen Atlas. More room means more fun,” the voiceover says.

The commercial ends with an onscreen line informing that the Atlas comes with “America’s Best Bumper-to-Bumper Limited Warranty, The People First Warranty”.